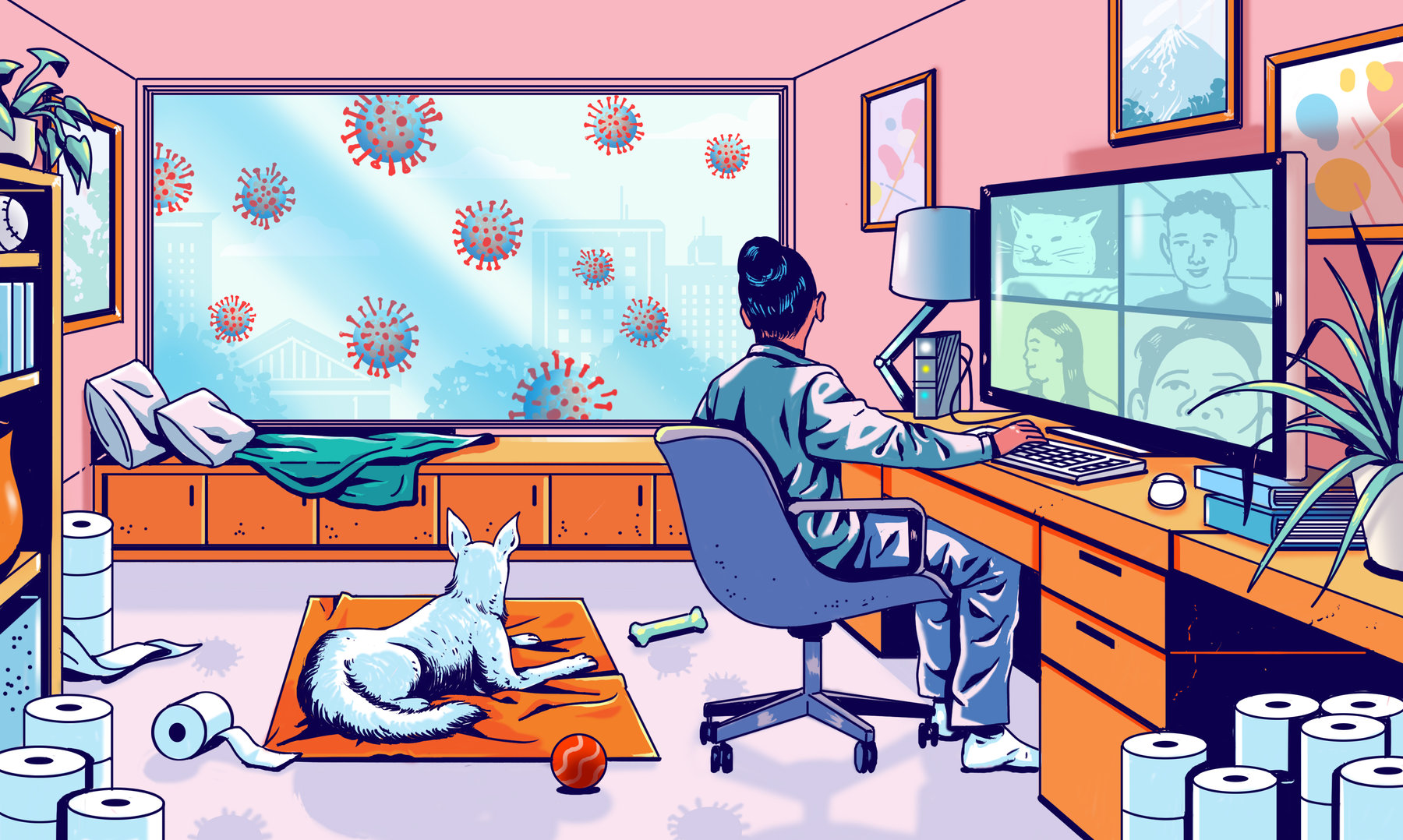 This piece came about from conversations within IWW Cymru, and we hope that it kicks off discussion in the wider labour movement. A quick note, while many forms of labour take place at home, such as unemployed and unpaid caring, in this piece “work from home” is used to refer to employed and “self-employed” workers who carry out computer-based work, or former office work.

For many years, workers have been told that flexible hours and working from home are impossible demands. But as companies have been forced to adapt to lock-down this perceived common sense has been shattered. This presents a range of possibilities and opportunities for workers who seek more autonomy in how and where they work.

However, trade unions have yet to examine the enormous challenges that arise when people work from home. Despite surface appearances, it is not quite as liberating as we might think. If not organised by and for the workers, working from home could actually make our conditions worse. This mode of work challenges our typical methods of workplace organising, and it could weaken the working class in some fundamental ways.

A day in the life of a Data Entry Analyst.

For three years I worked from home as a “remote working data entry analyst” for a start-up company who owned an online app. I was hired as a “self-employed contractor.” Owning my own laptop and being able to choose when I worked during the day was, according to this company, enough to make me “self-employed.” It just so happens that a boss does not have to issue holiday pay, sick pay, or annual leave to a “self-employed contractor” – a very convenient arrangement that internet-based companies like to make the most of.

The job involved searching for family-friendly events that would be advertised on the app, used by parents and guardians who were searching for things to do with their children. The company hosted the database on its own servers and, in conjunction with a program called Toggl to clock-in and -out, the company could calculate the average time it spent each worker to add an event. Every week they produced a report for each worker stating the average time it took them to complete the various tasks and whether or not it was under their target time. The purpose was to see if the worker was working to an ideal Goldilocks standard speed; not too slow as to be unproductive and not too fast as to be rushing and making mistakes.

A year into my time working there the company decided to shake things up. They created a list of all sixty remote workers and their average weekly times, laid out in a league table from fastest to slowest. It was anonymised in that you could only see where you were on the list, and they placed it slap-bang at the top of the front page, staring you in the face whenever you logged in or went to a different part of the database. They also included graphs of your own average times that could be viewed weekly, monthly etc. Those who performed well and were frequently at the top of the lists would receive offers to take part in extra projects, guaranteeing additional hours each week.

Unsurprisingly, because of these changes I found myself worrying a lot about where on this list I was. I was hyper-aware of the precariousness of my “self-employed contractor” status, knowing that they could instantly and effortlessly fire those who slid down the ranks. I frequently checked the data that would track my speed to ensure that I was being “productive” enough to stay employed. The anonymisation and presenting the workers in a ranked list had the effect of completely dehumanising the work process. The bosses ensured that I did not view the numbers on this list as my colleagues; they were faceless, nameless opponents whose success and hard work materially threatened me.

The company ran a Slack server which, for the uninitiated, is a chatroom specifically designed for companies with remote workers. Workers would ask each other questions and provide advice during the day, with pretty much all communication going through one main channel. Bosses would use Slack to post twee emoji-filled updates from the company, changes to the database, and “gold-stars” to workers who had been nominated by colleagues for being helpful. Workers were not expected to send private messages to one another, as it could all be done in this one channel. The only messages I sent and received were to mention if I had made or spotted an error that someone made, so it could be remedied before going public.

Coincidentally, Slack has recently changed their policy about direct messages so that employers can download them, including deleted messages, without having to inform you. Yes, your boss can read your Slack DMs.

Furthermore, not only were we not expected to chat informally or discuss workplace issues, we were financially disincentivised from doing so. We were on the clock after-all, and to talk would mean that our speeds would decrease and we would fall down the ranks. This meant that, to my knowledge at least, none of the workers were able to build close relationships and discuss these blatant problems with the work process.

The technology and style of working from home, especially in conjunction with precarious employment, by its very nature produces and weaponises anxiety to police workers, and makes them see one another as competitors rather than collaborators in the production of a commodity. This has massive implications for workers power.

The challenges to workplace organising.

Using my experience as a case-study for home working, it is worth examining the interrelated reasons why working from home can make workplace organising very difficult.

Firstly, as I have just noted, there was no obvious way of forming the personal relationships that are the bedrock of any strong workplace union. The platform that provided the only opportunity to communicate with colleagues was under the eye of the bosses, and the precariousness of the work itself meant that there was no time, incentive, or excuse to chat and make friends. Because the company relied on remote workers from the outset, none of the workers had pre-existing relationships that could be built upon or any way of contacting workers outside of channels that could potentially be viewed by management.

This might not be the same for workers who are only recently working from home and who know their colleagues already, but with the likelihood that work from home remains after lockdown, newly employed staff will face similar challenges. How will we win over new comrades and set about creating an organising team if we cannot even have a chat about football together?

Secondly, companies can leverage surveillance technologies and precarious contracts to create an arbitrary division of labour. The work process was individualised in such a way whereby workers had a financial disincentive to have solidarity with their colleagues. This becomes an extremely difficult problem to overcome if, as I have just argued, workers cannot form relationships.

Capitalists have recognised one of the contradictions in production; concentrating workers close together can dramatically increase production, but this close proximity allows workers to realise their collective power and make use of it. To mitigate this, capitalists set about dividing the workers in various ways, whether in the same workplace or by spreading production out across the world. The prevalence of bogus self-employment is the latest kind of arbitrary division of workers.

In my case as a Data Entry worker, there existed a Panopticon effect where precarious workers policed ourselves as a result of passive surveillance and data gathering. Although the bosses emailed out motivational messages praising us as “the remote team,” the relations of production themselves divided the remote workers against one another; each of us vying for additional hours, stressing ourselves out to stay near the top of the rank, feeling safe and secure when others were doing poorly by comparison.

Thirdly, following from these two challenges, working from home can cement the fundamental alienation that exists under capitalism. The dividing up of the workers as individuals in our own separate unit away from one another blinded us as to how we cooperated to produce the app service. Without proximity to one another, individual workers are unable to learn about the different tasks that go into producing the service, which means we are less able to understand the work process as a whole.

This has implications for an organising strategy; being able to conceive of the whole production process allows workers to identify strategic points where disruptive activity could have a cumulative impact, causing a chain-reaction of problems for the boss. When workers are alienated we are unable to make the most of our collective power. Beyond this, in a revolutionary or insurrectionary period, being unable to overcome alienation means that workers would lack the knowledge and relationships needed to take control of the means of production for ourselves.

This must be an ongoing conversation.

Workplace organisers need to find a solution to the disconnection and individualisation that comes with working from home. We need to find ways to talk with individual colleagues and then link up and discuss things as a group. The companies’ software infrastructure, surveillance, precarious contracts, and disincentives for workers talking together will make this task very difficult, and where it cannot be overcome workplace organising is impossible.

I do not yet have adequate answers as to how we do this and we will only find out through struggle and reflection. Though this piece is dedicated to a specific form of labour, I do not mean to present the increasing prevalence of home working as the overriding problem for the whole working class; most workers will and are being forced to go back to work in dangerous conditions, and unemployed workers are bearing the brunt of a woefully inadequate welfare system. Just as the spectre of automation is probably over-hyped by certain academics writing books about space memes, I do not think the spectre of home working should be exaggerated.

But it is a phenomenon that is growing at an alarming rate, with very little consideration from the labour movement. In an economy like ours with a high percentage of production situated within the service economy, it is only going to scale further. For the increasing numbers of workers involved, it presents troubling challenges that we need to start grappling with now.

8 thoughts on “Does working from home weaken the working class? By @bluebirdbeta”